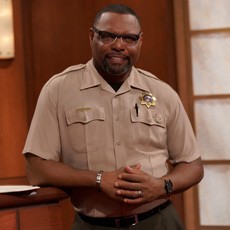 Petri Hawkins Byrd is the Bailiff on JUDGE JUDY, which has been the #1 show in first-run syndication for nine consecutive seasons. The Emmy(R) Award-winning program returned for its 24th season on September 9, 2019.

A native of Brooklyn, N.Y., Hawkins Byrd ("Byrd") received his Bachelor of Science degree in criminal justice from John Jay College of Criminal Justice in 1989. During this time, Byrd worked as a court officer in the Brooklyn Family Court system. In 1986, he was transferred to the Manhattan Family Court system, where he worked on a rotating basis with all the judges, including Judge Judith Sheindlin. "I was never bored in her courtroom," he said. "Her get-to-the-point style didn't always sit well with the litigants, and there were times she was definitely glad to have me around."

In 1990, Byrd relocated to San Mateo, Calif., to serve as a Special Deputy U.S. Marshall. Three years later, he accepted an offer to work as a student counselor at Monta Vista High School in Santa Clara, Calif. After reading a story about Judge Sheindlin's new book and upcoming television show in a 1995 Liz Smith column, Byrd decided to send a letter congratulating the judge, and jokingly asked if she would be interested in having him serve at her side again. To his surprise, Judge Sheindlin returned Byrd's letter with a phone call and offered him the job.

In addition to his work on JUDGE JUDY, Byrd has appeared numerous times on stage as a stand-up comedian and actor. He has also acted in films, television and commercials, as well as provided voice over work for radio, television and video games. Byrd's success has also made him a sought-after motivational speaker. In his spare time, he sings and writes music and poetry.