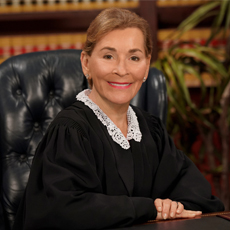 Judith Sheindlin is the presiding judge on the Emmy Award-winning JUDGE JUDY-- the #1 court show in daytime television since its 1996 debut, and America's top program in first-run syndication for the last 10 seasons.

One of the nation's most well-known media personalities, Judge Judith Sheindlin's numbers and brand continue to grow after more than two decades on the air. In the 2018-19 season, JUDGE JUDY averaged a robust 10 million daily viewers. In 2017, she extended her production agreement with CBS Television Distribution and her own Queen Bee Productions through the 2020-2021 season, marking a quarter century on American television.

In a front-page story, "Others Fade, but Judge Judy is Forever," the New York Times noted Judge Sheindlin's formidable ratings. But it also underscored her cultural impact, with a senior television analyst noting: "Increasingly daytime viewers are pushing back against celebrity, seeking authenticity and demanding high relatability. Judy just nails every single one."

Beyond her own program, Judge Sheindlin has created new television productions including HOT BENCH, featuring three judges which was the highest-rated new first-run syndicated program in its 2015 freshman season.

She's also written best-selling books and launched whatwouldjudysay.com, an interactive website. Over the past two decades, Judge Sheindlin has won numerous accolades and awards from the legal, academic and media worlds, and she has sponsored worthy philanthropic initiatives.

The rise of Judge Judy is an only-in-America story that began in 1982 when Sheindlin, then a prosecutor in New York City's Family Court, was appointed to the Family Court bench by Mayor Edward I. Koch. She became Supervising Judge of the Manhattan court in 1988 and heard more than 20,000 cases. During her years on the bench she earned a reputation for tough, no-nonsense jurisprudence, and established an "open court policy" which let the public and media view the family court process.

Judge Sheindlin's outspoken leadership became the subject of a Los Angeles Times profile in February 1993, and that caught the attention of "60 Minutes," which led to a segment on the iconic broadcast. After her appearance, Sheindlin was approached about the possibility of presiding over a courtroom on her own TV show. JUDGE JUDY premiered in national syndication on September 16, 1996, and the rest is history.

Emmy Awards and Other TV Honors

JUDGE JUDY, widely credited with reinventing - and reinvigorating - the American courtroom television genre, won Daytime Emmy(R) Awards in 2013, 2016 and 2017 for 'Outstanding Legal/Courtroom Program.' She was honored for her trailblazing work with a star on the Hollywood Walk of Fame, situated next to her good friend, actor Sidney Poitier. She's also received the "Gracie Allen Tribute Award" from American Women in Radio and Television for her contributions to the broadcasting industry, and the "Brandon Tartikoff Legacy Award" named after the late broadcasting pioneer. In 2012, Judge Sheindlin was inducted into the prestigious Broadcasting & Cable "Hall of Fame," for her contributions to the TV business and in 2019 was honored with an Emmy(R) Award for Lifetime Achievement from The National Academy of Television Arts & Sciences.

As her TV career began, Judge Sheindlin published her first book, "Don't Pee on My Leg and Tell Me It's Raining," in 1995. The book showed how and why family court fails in its mission to repair shattered families, and stressed the importance of accountability for everyone in the process--from judges, attorneys and social workers down to parents and children themselves. Her second book, "Beauty Fades, Dumb is Forever," a 1999 New York Times best-seller, challenged women to be the best they can be.

Judge Sheindlin has also penned children's books, beginning with "Win or Lose By How You Choose" in 2000, followed by "You Can't Judge a Book By Its Cover" the next year. Both were designed as tools to help parents communicate with their children and teach fundamental moral values. Judge Sheindlin's next book for adults, "Keep It Simple, Stupid, You're Smarter Than You Look," another New York Times bestseller, shared her wisdom on solving everyday family squabbles. In 2013 she published "What Would Judy Say: A Grown-Up Guide to Living Together With Benefits," the first in a series of books based on her website.

Judge Sheindlin has appeared on "Saturday Night Live," served as a judge for the "Miss American Pageant" and was profiled on "CBS Sunday Morning." She has also appeared on "Nightline," "A&E's Biography," MSNBC's "Headliners and Legends," E! Entertainment's "Celebrity Profile," and Lifetime Televisions "Intimate Portrait." In 2003, "60 Minutes II" interviewed Judge Sheindlin again, updating its original interview from a decade earlier. Later that year, VH1 named her one of the "200 Greatest Pop Culture Icons."

Judge Sheindlin has been the subject of interviews in the New York Times Sunday Magazine, Wall Street Journal, Los Angeles Times, USA Today, Forbes, Family Circle, People, Time, Entertainment Weekly, Parade, Good Housekeeping, TV Guide and Redbook. She has also been interviewed for the "Archives of American Television," which offered an in-depth look at her career and life as a mother, wife and grandmother. In 2007, Judge Sheindlin was named one of the top celebrities in entertainment in Forbes' "Celebrity 100" list.

In 2017, the University of Southern California unveiled "The Sheindlin Forum" in Wallis Annenberg Hall at the USC Annenberg School for Communication and Journalism. The space, named in honor of Judge Sheindlin and her husband, Judge Jerry Sheindlin, provides a place to advance the intellectually rigorous, civil discourse needed for progress in our current times. The Forum is home to the USC Annenberg Debate Series, which offers the community an opportunity to express and host diverse, well-informed discussions of complex issues. Each year a "Sheindlin Debate Scholar" works with students to help program the events..

Also in 2017, Judge Sheindlin was invited to speak at the Oxford Union, in Oxford England. Over the years, Judge Sheindlin has received many other awards and distinguished honors. She is the recipient of the "VP/Law Society" award from the University College of Dublin for her contributions to family law and legal academia. She has been honored with the "Distinguished Alumni Award" from New York Law School and the "Woman of the 21st Century Award" from The Women's Guild at Cedars-Sinai Hospital in Los Angeles.

Judge Sheindlin was included in The Hollywood Reporter's "Power 100," honoring the top 100 women in the entertainment business. She was also named International Spokesperson for North Shore Animal League America, to promote pet adoptions throughout the U.S. and the world.

Born in Brooklyn, Judge Sheindlin attended college at the School of Government at American University in Washington D.C. After graduating she attended New York Law School, where she received her degree. She began practicing law in Manhattan in 1965, and holds honorary Doctor of Law degrees from Elizabethtown College in Pennsylvania, New York Law School and University at Albany, SUNY.

Judge Sheindlin is married to Judge Jerry Sheindlin, a former Judge of the Supreme Court of New York. The second marriage for both, they have five children between the--Gregory, Jamie, Jonathan, Adam and Nicole--as well as 13 grandchildren. Although production of JUDGE JUDY takes place in Los Angeles, Judge Sheindlin lives in Florida.